Northern Arizona Wind and Sun (NAWS) has a forum dedicated to solar power.  I have bought from these folks and have even visited them.  The last time I was there the building had no solar panels on it and there was a power line.  Hmmmmm.

In the past I have pretty much ignored their forum because of the over technical slant and what I saw as people bragging about how smart they are.  I recently signed on and tried to use it for help with water heating, thinking somebody may have figured out how to do so with electric solar panels, since the price has dropped so far.  Nope, nothing but arguments and negativity.  If it wasn’t deleted you might find that thread by searching for water heater short circuit thermostat.  One of their moderators actually questioned why I would want to spend the money and effort to save only a few dollars a day worth of propane.  Excuse me, is this a fossil fuels forum?

I found an old electric element, measured the resistance, added some wires & clamps to it, stuck it in a gallon of water and did some experimenting.  Golly it worked; pretty much doing exactly what I thought it would.  I reported this on the forum and got arguments.  People never did read everything I said and kept saying that an MPPT controller would be needed.  Baloney, every watt that gets to a resistance electric element gets turned into BTU’s.  The math behind this is pretty simple, so I won’t go into it here.  You can find the design info elsewhere if you want to do the same thing.   Electric elements do not self limit volts like batteries, so MPPT is NOT needed.  You do not need to power the element at 100% of it’s rating.  Long hours of day light can be used to add up to the temperature rise needed, using a well insulated tank to store the energy, pretty much the same way that a battery is used to store electrical energy.  Some thought is required in the design, but it isn’t as hard as the idjits would have you think.  After I told them who makes the solid state relays that would be needed to switch DC power, I was told they are not available.  I bought 1170 watts of 24V solar panels and am shopping for the other things needed.  This will be set up as a dedicated system just for heating water, not for load diversion.  All of this will be paid for with less than three years of propane costs.  That is a very good pay back.  There was another guy on the forum trying to do the same thing and we have been talking in private about how it works.  Both of us stopped trying to convince the forum idjits. 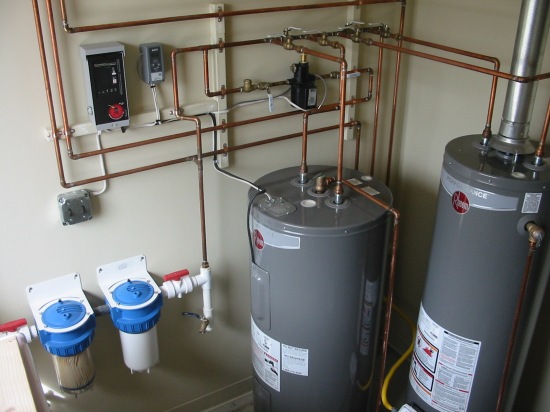 Does anybody believe I would go to this much work and expense if I didn’t KNOW it will work?  The pipes have all been insulated.

OCTOBER 2018:  I finally got the panels up on the roof after letting way too many other more important things get my attention first.  Results:  It works exactly as I predicted.  Immediately measured 8.6 amps current with 107VDC at the relay, 920W of heating from 1170W of solar panels that were not aimed directly at the sun, with no controller at all.  The panels are 24V and wired 3 in series.  (The element measured 10.4 ohms and a slightly lower resistance or higher voltage would help.  Cold winter temps should raise the voltage to over 130V.  130V / 10.4 ohms = 12.5 amps, more than the panels can produce.  The max will be 10.6 amps.)  The electric tank took a couple of days to get hot (up around 140F) and now in the morning we have over 90F water there, pre-heating what goes to the propane tank.   On sunny winter days I see around 900W of heating going on and water temp over 125F.  Tanks are now insulated with extra fiberglass blankets.  I cannot really meter the results, but it looks to me like our propane use is going to be less than 5% of what it used to be.  SUCCESS!  In your face to that arrogant asshole moderator on the forum.  BTW, I looked there again and now they are talking about doing this, but with expensive controllers.  We now use no propane on sunny days, heating both the house and the water.  But “it won’t work”.  I tried to sign onto the forum and I have been permanently blocked.  May the moderators and NAWS both rot in hell.

Those moderators answer every question asked, even if they do not know what they are talking about.  One of them is a grid tied expert and he thinks he knows about batteries because he is an engineer and knows the chemistry.  No doubt the guy has letters behind his name…  BS, MS & PHD  (think about it).  Sorry, fifteen years of experience using batteries have taught me that there are many people working in the battery world who don’t really understand charging using limited time and amps like we have in the solar world, so people living in grid tied houses have no business talking about batteries.  They tell people to undercharge, which will destroy batteries.  I have seen many batteries ruined by 14.4V charging, when these people are still recommending it.  (Added later:  I am talking about solar charging here that can be as short as five hours on winter days, not plugging a charger into the grid and leaving it running all night long, which will eventually work at only 14.4V)  How do I know that what I have been doing for years is actually correct?  Last summer a guy I did solar work for many years ago called me and asked if he should buy new Trojans, since his were failing.  He and his wife live full time in their motor home and hardly ever plug in, living on the solar power I installed for them that comes from a Morningstar Tristar PWM set at 14.8V with temperature regulation.  Before answering his question I asked him just how old his Trojans were, because I really could not remember….  He said ELEVEN years.  So much for the general consensus, folks.  I told him to try to find Crowns, but obviously Trojan also makes a good battery, so buy whatever you get the best deal on.

I tried to reason with them…  Really, I did.  I even went to the trouble of talking with NAWS management about how the bad advice being given on their forum would lead to people ruining batteries and they did finally post a link to the latest Crown charging recommendations, proving what two of the moderators had been saying was wrong, but refused to do anything about their moderators.  A few days later they were still dispensing wrong advice.  Finally I got angry and told the truth to one of them.  After he called me stupid (on a public forum) I told him that anybody who would do that has no business being a moderator.  I think I used the term arrogant fool, exactly correct.  I am banned from the forum for life.  I’ve been kicked out of better bars than this one.

One more thing.  Those moderators are telling people there is nothing wrong with putting solar panels on north facing roofs and in one case on a south facing roof that is shaded by a neighbor’s house.  My opinion of this is that it is defrauding the US tax payers who are paying for those solar panels.  I also brought this to the attention of NAWS management.  They refused to address this.  Wake up people….  Forums are dangerous.  This one is no different.

The bottom line for me now is that I will never again recommend NAWS.  Do whatever you want, but do not complain to me.